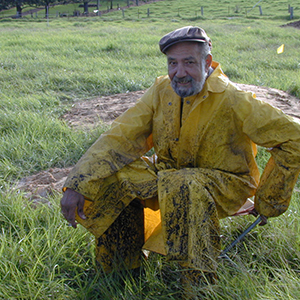 Obituary: Jim Davis: A Full Life but a Muddy One!

By Susan McIntyre-Tamwoy, September 2005 Published in the Newsletter of the Australian Association of Consulting Archaeologists Inc. No.107 November 2005

For many of us the past week has been a sad one with the death of Jimmy Davis at his home in Berkeley, Wollongong. Kerry Navin, Kelvin Officer, Mary Dallas and myself, joined several other archaeological colleagues, Jim’s family, his friends and professional acquaintances at Jim’s funeral.

Many AACAI members and others who have worked in the Illawarra knew Jim. He was the sort of person who engendered an immediate fondness in those he worked with. Many archaeologists will know him as the official spokesperson of the Wodi Wodi Elders, but to many of us he was much more – a loved and trusted friend.

He was only 69 when he died after a period of declining health and I can’t help feeling that the world has been short changed with his passing. Jim’s funeral was held on Friday 16 September at Kembla Grange Lawn Cemetery. The graveside service was attended by many of his friends and relatives. I think Jim would have liked his own funeral which was a mixture of accolades, amusing anecdotes and heartfelt tears. His wife Muriel said that they had chosen his burial spot for its bush aspect as he would have wanted to be in the open with the birds and the trees.

Even for those of us who knew Jim fairly well, there were surprises revealed which made us laugh and some which engendered admiration, in the anecdotes about his life, the varied work experiences, and the evidence of commitment to his people. Anyone who ever visited Jim and his wife Muriel can attest that their home was always a sanctuary to various friends and family members and no matter how crowded their house or how tight their budget you were always made welcome with a cup of tea and some of Jim’s witty banter. 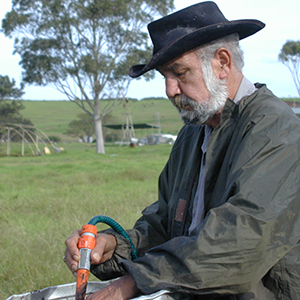 Any of us who worked with Jim will know that he was better than any commercial anti-depressant for maintaining high serotonin levels. During excavations the sieves were always the centre of uncontrolled laughter as Jim produced an endless stream of jokes and puns. Ahh yes! … and then there were the practical jokes! How many of us have been at the receiving end of those? After the funeral Trish Saunders recalled to me that Jim sometimes produced a concrete skull (from a garden statue) and that he caught her out, as he has probably done several other archaeologists, by burying it in an obvious place in the survey area so that just the crown of the skull was visible and then calling her over saying ‘Trish Trish what do you make of this!’.

Everyday events in the field took on a comedic aspect with Jim. I can remember carrying out a survey with him and Kerry Navin during which we had one of our many amusing close encounters with a fence. I was holding up a strand of barbed wire so that Kerry could get through a fence, when ‘gentleman Jim’ decided to help by lifting the electrified wire with the crook of his walking stick. Unfortunately he brought it into contact with my hand and I yelped and let go of the barbed wire which sprang down on Kerry’s back hooking into her shirt and effectively trapping her half way through the dual barbed wire and electric fences. She was in real danger of doing herself an injury because it started us all laughing hysterically and none of us were fit for sensible action for some time.

And then there was the time that for some reason I had to reverse Kerry and Kelvin’s 4WD with trailer attached. Well Jim always seemed to know what he was on about so it was only natural that I listened to his instructions, despite Sean Suddery (his son-in law) frantically signalling me to ignore Jim and listen to him! Suffice it to say that we got the trailer into such a tight angle that the only way to extricate it was to disconnect it and manually move it!

One part of me didn’t want to go to Jim’s funeral as I could then have just pretended he hadn’t really died and that one of the rare ‘characters’ that have blessed our lives wasn’t gone. I could have pictured him as I last saw him sitting at his kitchen table in Berkeley. However, I am glad I went and got to share in his send off with his family and friends.

Jim never pulled punches, he could not abide bullshit but he always kept his sense of humour and could draw a laugh in any situation. These qualities sometimes made him a target of less honourable people who would have preferred him to play their game. He was a man who was comfortable in his culture, who had no need to invent ‘heritage’. He was a man that was confident in his knowledge about his heritage and saw no conflict in learning new things and tapping different techniques to reveal information. This is, of course, the sign of a mature and confident person. Unlike many less secure people, he did not waste time with the overused rhetoric that ‘archaeologists are trying to take over our heritage’ etc. Instead he was keen to learn from specialists whether they be anthropologists or archaeologists or historians, although this is not to say that he always agreed with them, nor was he reticent about challenging them!

He has passed his strong sense of identity and an appreciation of his heritage to his daughters. They tell me that they are going to carry on his work and stand up for integrity in the Aboriginal community in general and in the heritage industry specifically. I wish them good luck and hope that Jim’s spirit lives on through them. It was an honour to have known and worked with Jim and at some distant point in the future when his daughters are old and retired, if they too can look back on a lifetime of integrity and commitment to Aboriginal issues like Jim’s and are held as close in as many hearts, then they will truly have nurtured his legacy.

Jim also had a proud record in the late 1950s as a boxer in the welterweight division. Of eleven fights, Jim won six, two from knock outs (http://boxrec.com/list_bouts.php?human_id=128295&cat=boxer). He almost represented Australia, but for a series of circumstances that only Jim could recount in appropriate tragic and hilarious proportion. 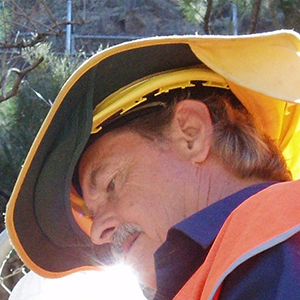 On the night of the 7th of June, 2011, our good friend and colleague Lindsay Smith died after a short and one sided conversation with cancer. Lindsay came to archaeology in the latter part of his life, completing a gaggle of award-attracting archaeology qualifications from 1995, culminating in his PhD at the Australian National University (ANU) in 2006. Lindsay joined Navin Officer Heritage Consultants (NOHC) in that year and quickly became a trusted and valued colleague. He worked on both historical and prehistoric sites, with characteristic expertise, rigor and a wry sense of humour. We have missed him greatly since his diagnosis forced his retirement in October, 2010. 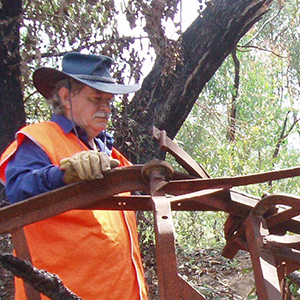 Lindsay’s contribution to Australian archaeology is substantial and will be resilient in the face of time. The value of both his MA and PhD research, which revolved around the archaeological record of the Chinese in Australia, was recognised by postgraduate awards by the ANU. In 2008 his PhD thesis was awarded as the best postgraduate thesis for that year by the Australasian Society for Historical Archaeology. Lindsay enjoyed his later role as a Visiting Fellow with the ANU School of Archaeology and Anthropology, and particularly its ‘agreeable juxtaposition’ with his role as a senior consulting archaeologist. The breadth of Lindsay’s archaeology was well exercised and adapted while at NOHC with his conduct of oral history projects, archival recordings and numerous assessments and excavations.

As a believer in mortality and full stops, Lindsay was much taken by the Latin epitaph:

Granted Lindsay, but for those of us still sweating above ground, we will always care, and always miss you. 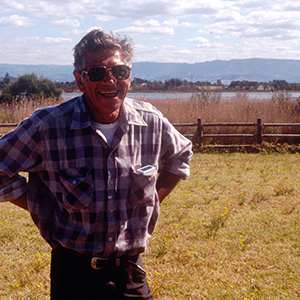 A self-confessed ‘stirrer’, Dick was a tireless and much respected community Elder and advocate for Aboriginal issues in the Illawarra. He regularly spoke up, both in front of the camera and behind boardroom doors in support of social issues and the protection of Aboriginal culture. Following the passing of legislation in 1974, protecting Aboriginal sites in NSW, it was  a requirement to identify and assess sites which may be impacted by developments. This work was typically  coordinated by archaeologists and relied heavily on information provided by local Aboriginal people. As a long term representative of the Illawarra Local Aboriginal Land Council, Dick worked closely with archaeologists, to identify and protect local sites and places of cultural significance.

Dick’s local knowledge was extensive, and drew upon both his family and community networks, as well as his personal experience. Originally from Walcha, Dick’s association with the Illawarra began as a boy growing up on the southern bank of Currambene Creek and the Bilong encampment near Huskisson. He married Thelma Brown, from the local Illawarra community. Prior to his Land Council work, Dick’s experience spanned jobs in forestry, farming and soil conservation. Dick’s work with the local soil conservation service introduced him to the vulnerability of Aboriginal sites, such as middens and burials, within coastal dune deposits. Long before the systematic recording of Aboriginal sites by government authorities, Dick was creating his own mental map of places and sites, revealed during his work, or told to him by community members. 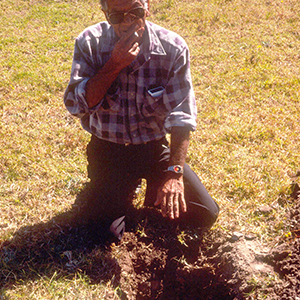 The holders of cultural knowledge are faced with a difficult decision when confronted with the legal  processes of assessment and development approval: to attempt to influence through constructive engagement and knowledge sharing; or to remain covert and protest as necessary from a position outside of that process. Both options have their drawbacks, and both are evident across the history of cultural heritage impact in the Illawarra. In a long association and friendship with NOHC founders Kerry and Kelvin, Dick’s response to this dilemma was always one of pragmatic engagement and personal integrity. He always provided an appropriate level of information and assisted in the assessment process with the aim of achieving good conservation and social outcomes. An example of a positive outcome was the abandonment by Council of a proposed road crossing across the lower reaches of Currambene Creek at Jervis Bay. This proposal would have impacted an important early Aboriginal settlement and burial site.

Dick later worked tirelessly for the State Aboriginal Land Council in the repatriation of Aboriginal skeletal material, returning ancestral remains from various museums and collections to their local communities. Towards the end of his life, increasingly bad emphysema became an unwanted companion in this work.

There are many conserved and salvaged archaeological sites across the Illawarra which owe their continued existence and cultural relevance to Dick’s actions and personal engagement. His is a substantial and lasting legacy to the Aboriginal and wider communities of the Illawarra and New South Wales.